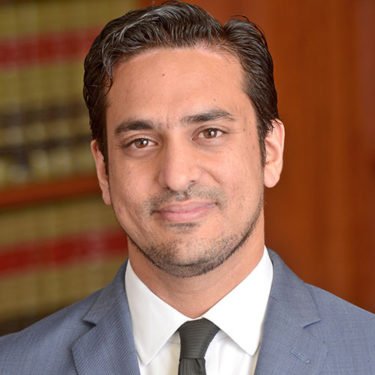 Amjad has extensive stand-up trial experience, having won multiple significant jury verdicts, including an award of approximately $12.5 million in compensatory and punitive damages. Amjad has significant appellate experience briefing and arguing appeals in both state and federal courts across the nation. For eight consecutive years (2012-2019), Amjad was named a “Rising Star” by Super Lawyers Magazine.

In addition to his litigation practice, Amjad devotes a considerable portion of his time to pro bono matters. Amjad has special expertise in asylum and refugee law, deportation defense and providing legal aid to disaster victims. Amjad was co-chair of Latham & Watkins’ global human rights and refugee practice group. Amjad has first chaired over two dozen successful immigration and asylum matters. Amjad has received numerous awards and accolades for his pro bono work, which includes sharing the 2012 Muslim Advocates Thurgood Marshall Award. Amjad has also served as an expert witness in asylum cases and has testified five times before the U.S. House of Representatives on the human rights abuses of religious minorities in the Near East and South Asia. Amjad is also an elected member of the Council on Foreign Relations and Pacific Council on International Policy.

Since 2014, Amjad also serves as an Adjunct Professor at UCLA Law School, where he teaches “Fundamentals of U.S. Contract Law.” From 2017-2019, Amjad served as a lawyer on the California State Board of Pharmacy (appointed by California Speaker of the Assembly, Honorable Anthony Rendon). Amjad has published articles on qui tam and derivative suit litigation, among other subjects. Amjad has also served on the Access to Justice Committee of the Los Angeles County Bar Association and is also a member of the American Bar Association, the Los Angeles chapter of the Association of Business Trial Lawyers and the South Asian Bar Association of Southern California. Amjad is admitted to practice in all California courts, the United States Courts of Appeal for the Ninth Circuit and Federal Circuit and United States District Court for the Central District of California.

Co-chair in a 6-week jury trial on behalf of a low voltage contractor plaintiff against a prominent manufacturer of a school intercom product. The case ended with a complete plaintiff’s verdict on all claims and an award of $12.5 million in compensatory and punitive damages.

Member of the trial team in a four-week jury trial in the defense of trustees of a half billion dollar trust. The case focused on whether the trust had breached its promissory note and security agreement with plaintiff (a private third-party company) and ended with a complete defense verdict. Plaintiff had sought $400 million in damages.

Member of the trial team in a multi-week jury trial on behalf of a real estate developer in the defense of a multimillion-dollar action filed by the owner of a major sports team. The case ended in a complete defense verdict.

Represented a Fortune 500 company in a novel, years-long trade secrets case in federal court in Los Angeles.  Case ended in a permanent injunction for our client, $66,091.25 in compensatory damages, and an award of $578,512.00 in attorneys’ fees.

Counsel to the estate and widow of a deceased business owner in a $300 million False Claims Act case brought by the U.S. government involving the largest beef recall in U.S. history in which summary judgment was entered against the U.S. government.  The case was profiled (and Amjad was quoted) in Law 360.

Counsel to officers and directors of a privately held company in a shareholder derivative suit in which summary judgment was entered.

Counsel in an asylum representation for an activist/journalist from Columbia; asylum was granted at the trial level

Counsel in an appellate asylum representation for an Egyptian Coptic Christian; petition for review was granted by the 9th Circuit

Counsel in an affirmative asylum representation for an Ahmadiyya Muslim from Indonesia in a case of first impression for the persecuted group; asylum was granted at the interview stage

Counsel in an affirmative asylum representation for the daughter of an Ethiopian actor and playwright; asylum was granted at the interview stage

Counsel in an affirmative asylum representation for a juvenile immigrant from Honduras; asylum was granted at the interview stage

Counsel for Humanity First, USA to manage a grant connected to the Qatar Katrina Fund; legal work led to the rebuilding of six mosques and schools in the Greater New Orleans

Co-Author, “Special Litigation Committees That Have Lost on Motion to Terminate the Derivative Litigation Might Still Prevail,” Securities Regulation and Law Report, July 2008

Co-Author, “A Dream Deferred: From DACA to Citizenship,” Appleseed Foundation, 2014